Bermondsey has a music tradition that goes back to places such as The Star Music Hall opened in October 1867 and was probably begun as a result of the one hundred new houses which had been built in the Bermondsey area a year earlier. It was located at 189 Neckinger Road, now Abbey Street.

Not far from this location, The Rotherhithe Hippodrome also known as Terriss Theatre at 34 and 36 Lower Road, Rotherhithe opened on Monday the 16th of October 1899

Going forward to the 2015, the area has changed drastically and many places have been lost over the years. Yet, the Blue Bermondsey is still home to many traditional pubs that would later collaborate to create the Bermondsey Folk Festival. First, let us introduce the Blue Bermondsey BID, the organisation which made it possible

The origins of the Blue Bermondsey BID began with the work of voluntary representatives from local business who got together in the early 1990s as the Blue Market Traders Forum an informal group who continually lobbied local Councillors and Southwark Council on behalf of local businesses to improve the area, which had become run down and lacking investment. These pioneering efforts got the ball rolling, with the Market place getting a facelift and many small community events being established. 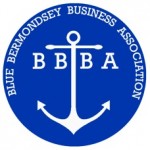 2008 The Blue Market Traders Forum became an officially constituted group as the Blue Bermondsey Business Association (BBBA), whose efforts took a more pro-active role on many initiatives, most notably securing £700,000 funding into the High St, forming steering groups, engaging and canvassing businesses and local residents, resulting in the major regeneration works of the Market place, shop front improvements, restructuring of Southwark Park Rd to bring more flexibility to the on road parking with the addition of loading bays and of course the ICONIC Bermondsey Lion artwork that has symbolised the  resurgence of the community. 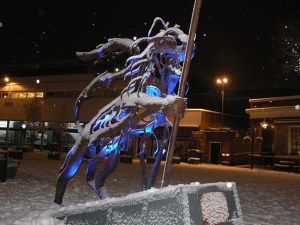 Path to the BID

2010 with the onset of the credit crunch era, funding for BBBA initiatives became increasingly difficult to secure and other avenues needed to be explored which led to the idea of a BID. Three years of thorough research followed and in April 2013 the BBBA conducted a feasibility survey into the possibility of a BID for the Blue. In May 2013 our findings were presented to the government for consideration, who approved the development of a BID proposal to put to ballot

The BBBA BID Steering Group was constituted in autumn 2012 to develope the BID proposal and in June 2014 the ballot campaign followed asking eligible businesses to vote yes or no to the proposals. The result was announced on 4th July 2014 with 89% of voting in favour of the BID term for five years until October 2019.

The Blue Bermondsey BID was keen to create a new event that would create a new an opportunity to people to discover the area while providing a music journey across different venues in the areas. It was important at this stage the collaboration with Cunning Folk, a folk performer & music promoter & also runs the South East London Folklore society.

As many other festivals, the beginning is never free of issues that need to be sorted, nevertheless we did, and the Blue Bermondsey was born in 2015

This site uses Akismet to reduce spam. Learn how your comment data is processed.